A bumper spring for Swinhoe's Robin!

I pulled into the tiny car park near the harbour at Kenmin Kaihin Koen rather later than anticipated. Dawn had already dawned; it seemed for once I'd embraced the idea of a leisurely drive up. No sooner had I switched off the engine than I became aware of a Swinhoe's Robin singing in a small isolated clump of bushes 20 metres in front of me, and another in the woodland behind. So much for my hoped for quick nap before birding.

From the car park, the road (closed to traffic) runs through about 100 metres of open woodland with little undergrowth before getting into the dense woodland of the park. In that 100 metres I had Mugimaki, Narcissus and Blue & White flycatchers, there were Brown-headed, Eyebrowed and Japanese thrushes and I could hear seven (yes seven!) different Swinhoe's Robins singing from the surrounding dense woodland. My previous best for simultaneously singing Swinhoe's here had been three.... but seven from, well, effectively the car park! This was unheard of, and one local birder concurred that this year was way above and beyond anything normally expected.

As the morning wore on I heard more but was forced to stop counting at 14 for fear of duplication. To be more accurate, the day's total was 12 heard plus two birds seen feeding together on a very narrow fishermen's path to the riverside.

It's improbable that I managed to hear every singing bird in the park, I didn't even cover the whole area. In fact, the following morning I made a beeline for a central ride that I hadn't walked on the first day, before the forecast rain arrived, and had five birds singing along along that stretch. If we assume that as well as the males I missed, there could be a roughly equal number of females present, then the total number of Swinhoe's Robins in just this one park was astonishing.

The rain duly arrived just before 6am. My plan had always been to spend this second day driving round the paddyfields surrounding the city looking for waders, then the third day would see me head further north to other good migrant sites. The wader hunt across the fields proved quite successful, 11 species, though nothing to rival the Asiatic Dowitcher or Western Sandpiper elsewhere. All the expected egrets were there, it was nice to see juvenile Japanese Wagtails already on the fields and one benefit of the rain was Pacific Swifts were low over open water. But, I always felt my time would be better spent looking for passerines.

I headed back into the city for a bite to eat and as the rain had eased off with still an hour's daylight remaining I went back to the park. Swinhoe's Robins were still in full voice despite the miserable weather but the highlight was finding a female Grey-backed Thrush. This is a species I always associate with island birding and is only my second mainland sighting.

The first day had been warm with clear skies a light southerly wind. The Robins, rather surprisingly I'd thought, sang from dawn to dusk without a lull and this was true of the migrant thrushes too. I'd felt sure there would be a major clear-out that night because of the seemingly perfect conditions, and before the onset of bad weather. But to my surprise, everything was still singing through the murk of day two.

I could guarantee nothing would be leaving that night, not after such a heavily overcast, rainy day. Being certain everything would still be present the following morning, and that there was a chance of new arrivals, I decided to spend a third day.

This turned out to be quite interesting from the migrant Robin perspective. I heard 16 different individuals in the early morning (before, again, stopping counting to avoid possible duplication) and saw one additional bird. However, unlike previous days, and weather-wise this was a carbon copy of day one, singing stopped at about 09:30-10:00, the Robins, the thrushes, all the onward migrants as far as I could tell just stopped. I did hear a couple of Japanese Thrushes occasionally in the afternoon but otherwise it was only the local Great Tits, Greenfinches and the like that made any sound. I can only imagine this striking difference is because they were all perfectly aware, well in advance, (unlike me) that they wouldn't be leaving the first night but that they were all equally aware they would be off that night. To my human senses there was no difference between the first and third days, yet to the migrants there must have been a world of difference, and what seems a collective understanding was reached mid-morning, hours before they were likely to leave.

One final thought that struck me over those three days was that it's pointless trying to see a singing Swinhoe's Robin! All three birds I did see were feeding not singing and, though I tried, I didn't see a single singing bird. I saw and heard a lot of Swinhoe's on Tsushima last year and the pattern was exactly the same, I saw several feeding birds but none singing. Thinking back, this has always been the case, I've never seen a bird while it's singing despite seeing (and more especially hearing) many over the years. Last year and this are the first two years where I've encountered so many birds in a short time allowing this apparent pattern to emerge. I'm well aware this could be no more than coincidence, but in future I don't intend giving a singing Swinhoe's more than a few seconds before moving on... there'll be one on the track up ahead. 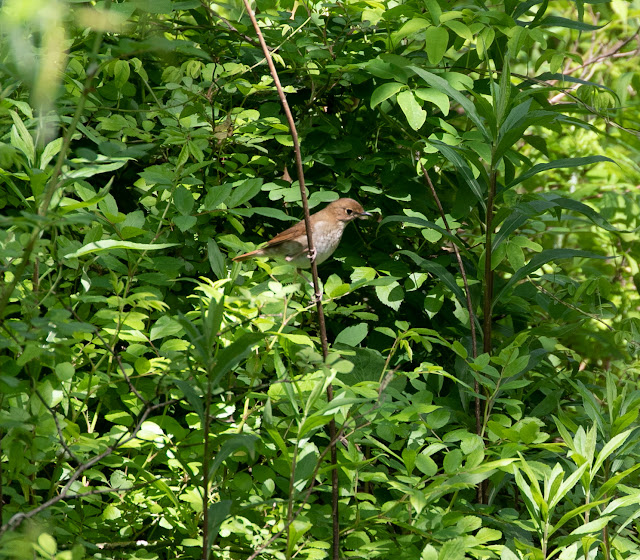 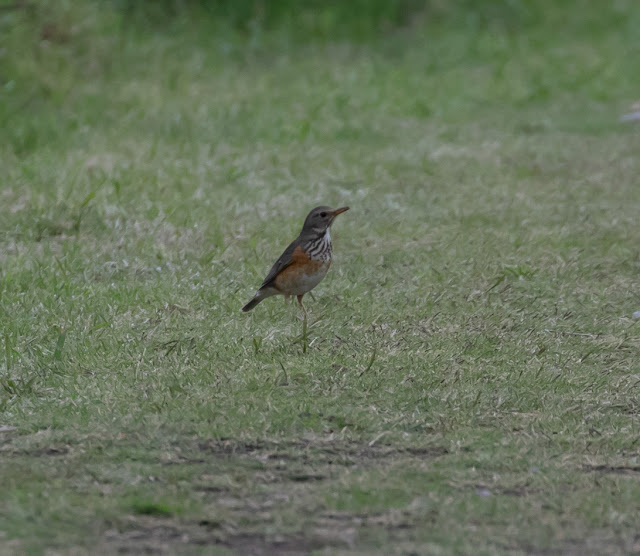