Latham's, Swinhoe's and Pintail... a good month for snipe.

September was very much a staying local month, covering a small stretch of my old patch at Ogura. Mainly because I didn't have the time to do otherwise, and not seeing that much for my efforts if truth be told. I've seen some quite spectacular wader passages here over the years but 2022 won't be going down as one to remember.

I covered a relatively small part of the overall area on nine dates through the month, seeing snipe other than Common on eight of them; this after making several visits throughout August when no migrant snipe were recorded. Actually, my first non-Common snipe were two birds (probably Swinhoe's) in Mie on 2 Sept though I had already seen a party of three Latham's there in August.

As far as confirming ID was concerned, all the following birds were 'tail-checked'. I saw a total of six Latham's, four Swinhoe's, one probable Pintail and a few swintail. As I only covered a relatively small area, it's reasonable to infer numbers passing through would have been much greater. There were also many Common, up to 10 per visit but even these disappeared in October suggesting all were migrants rather than birds that will winter here. 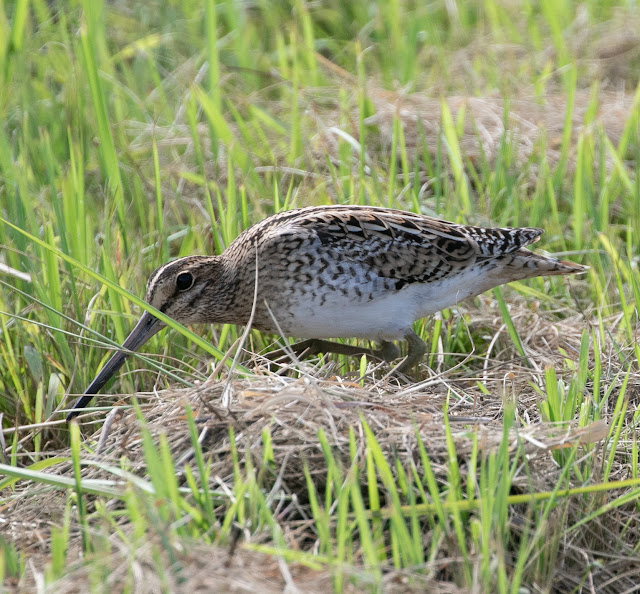 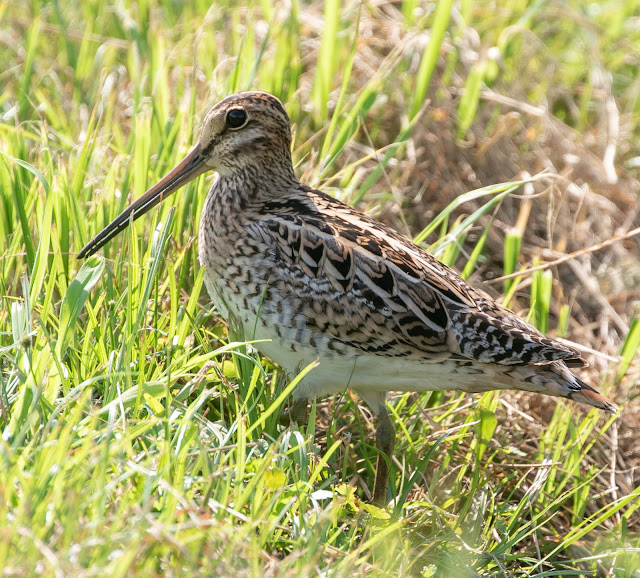 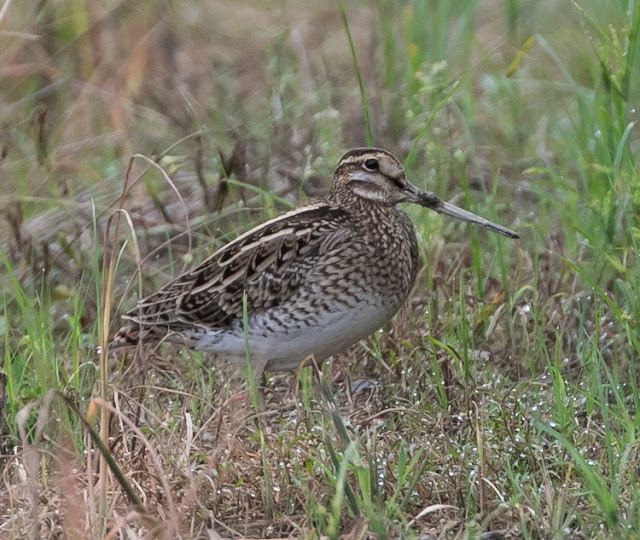 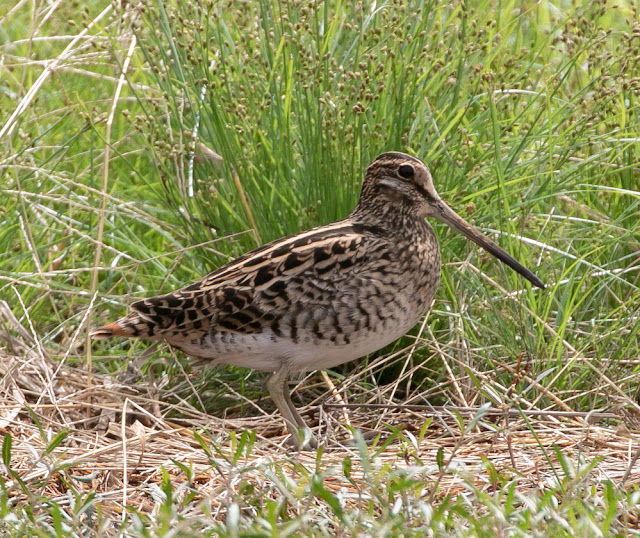 (21 Sept) Flushed by a Siberian weasel soon after I found it. I already suspected this could prove to be a Pintail and this image taken just before it takes flight appears to show pins in the spread tail. The weasel's ears are visible in the grass just to the left of the tail. 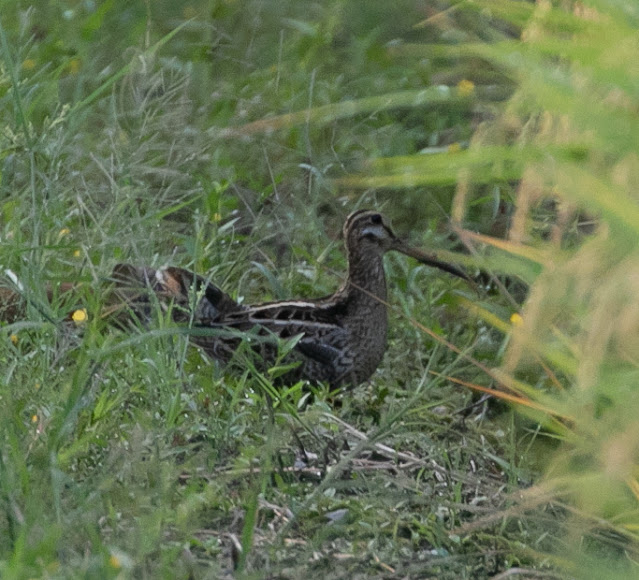 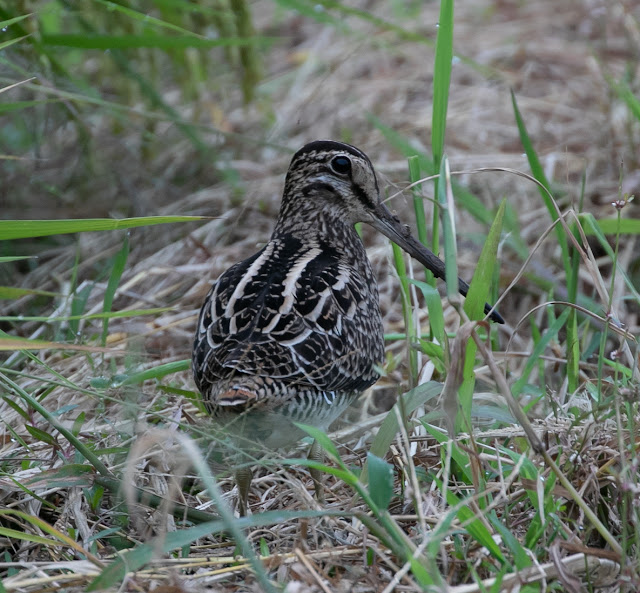 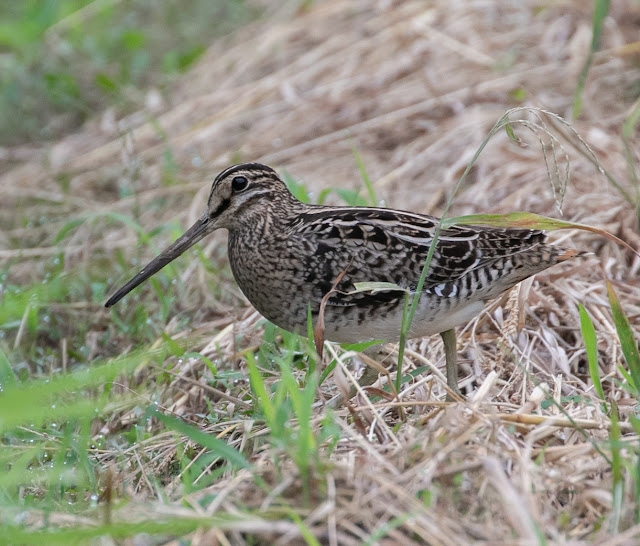 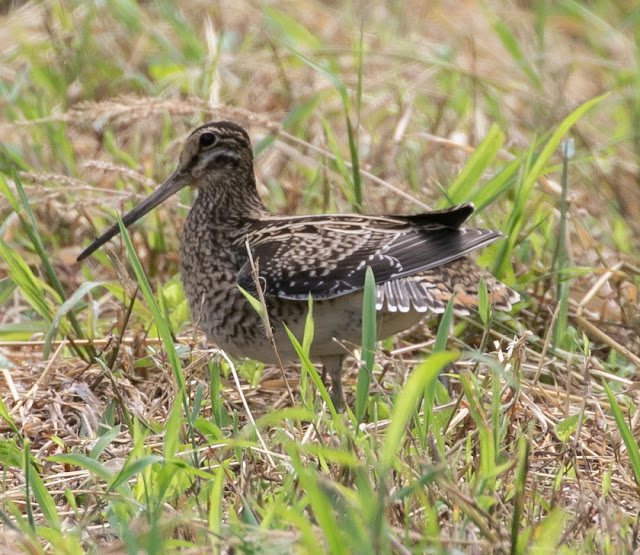 (28 Sept) The only juvenile/first winter. 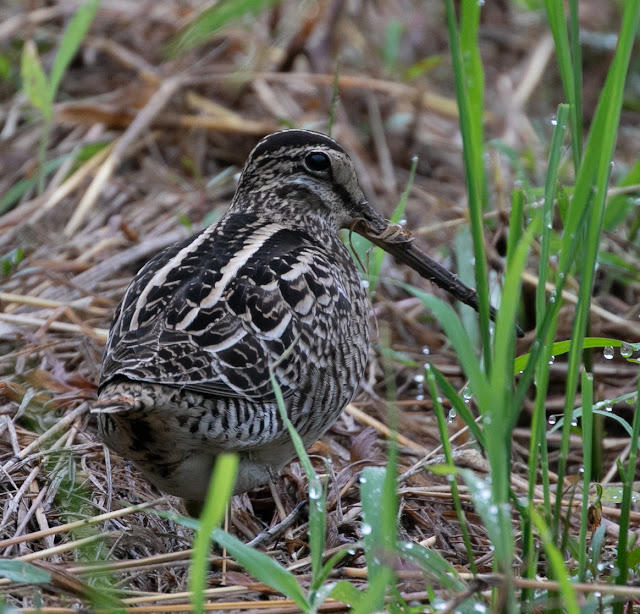 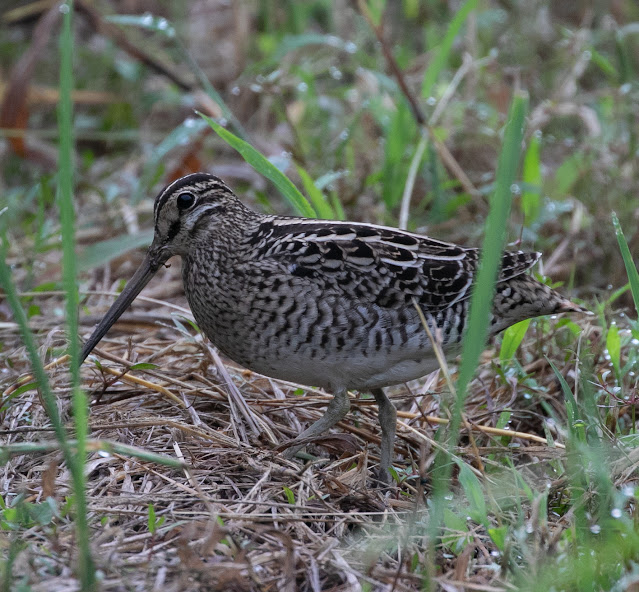 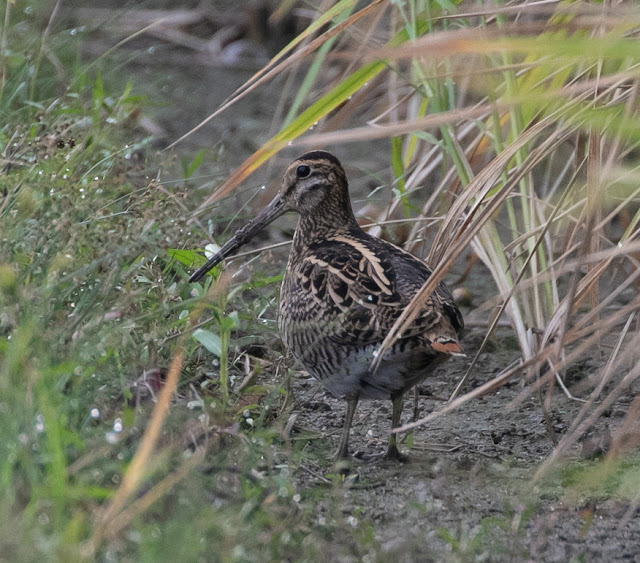 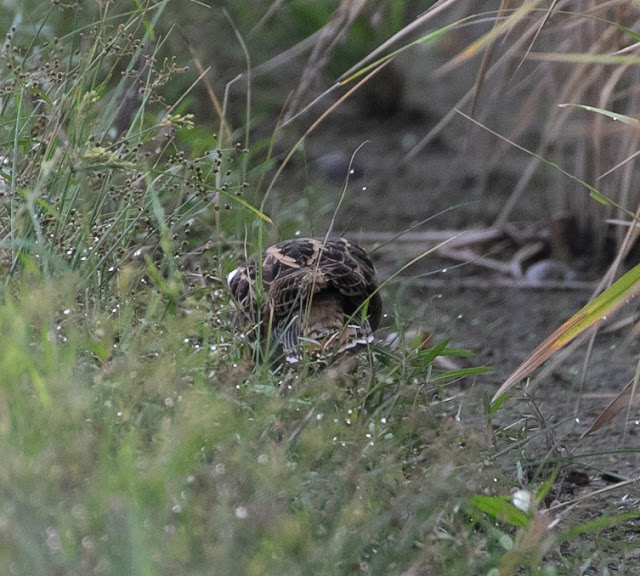 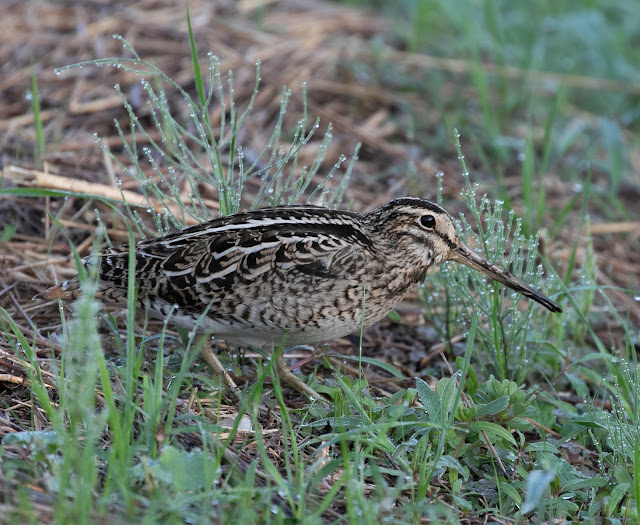 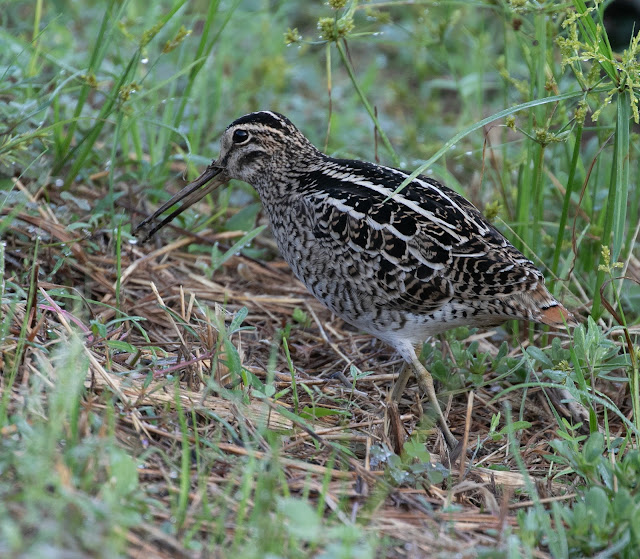 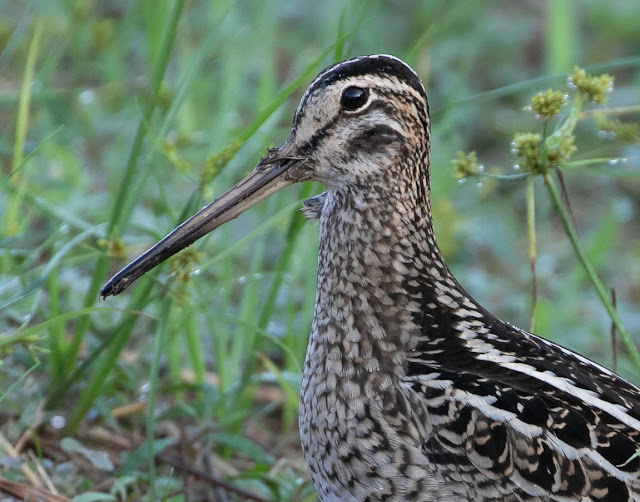 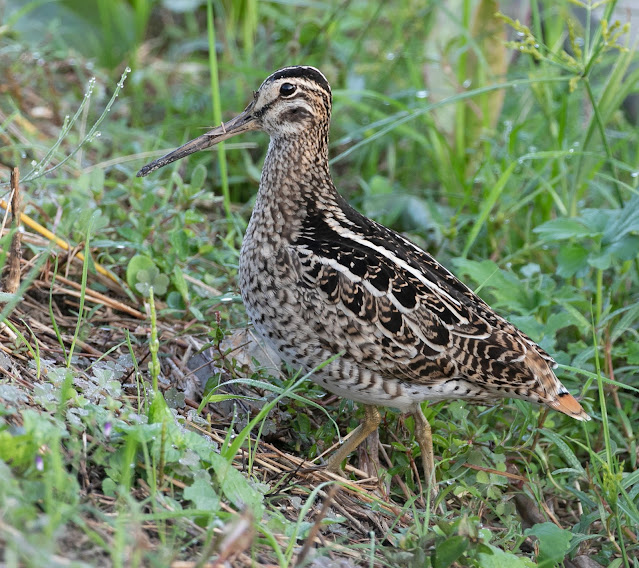 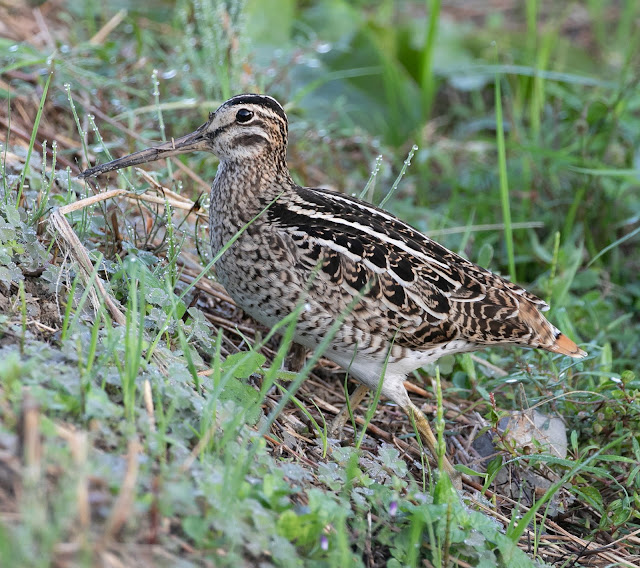 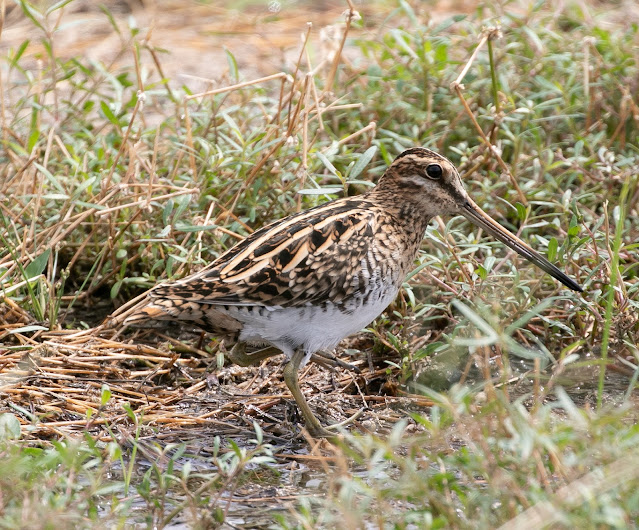 Finally, I can't resist throwing this in just because it has 'snipe' in the name. These are local breeders and there were males with tiny chicks running round in September.

Posted by Neil Davidson at 19:54 No comments:

It's the fore- and upperparts that normally attract attention when it comes to male Blue and Whites, so just to be different here's one where the underparts take centre stage. These blue centred longest undertail coverts came as a surprise, so much so that I was thinking "Do they always look like this and I've never paid any attention, or is this unusual?". Fortunately, it isn't something obvious that I've always overlooked and does appear to be unusual, although quite how unusual, I don't know. For what it's worth, I haven't been able to find any online images that match it. I saw this bird on 4th May in Kanazawa, Ishikawa. 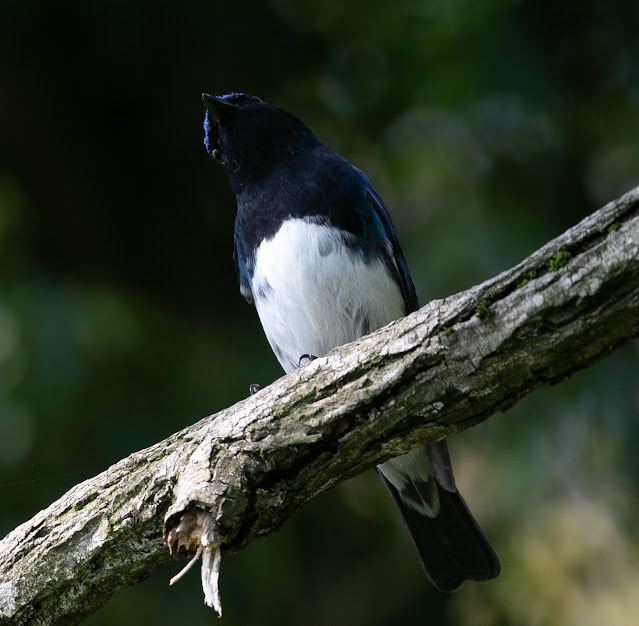 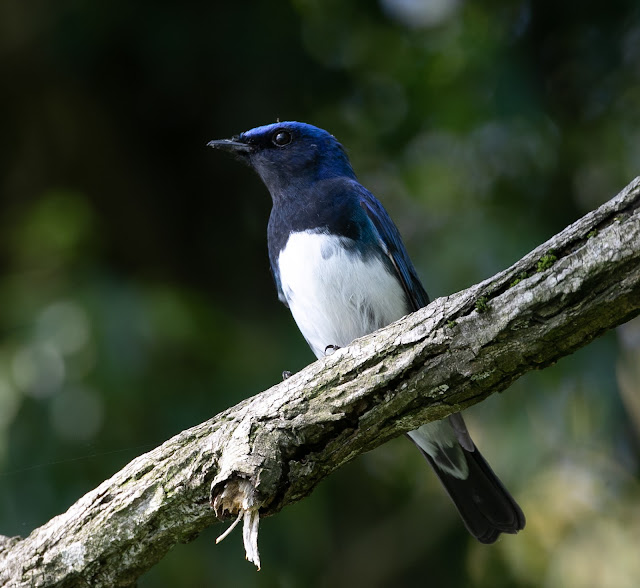 What appear to be blue feathers, slightly masked by overlying white, on the lower breast also catch the eye.

Below is a female photographed the following day on Hegurajima. 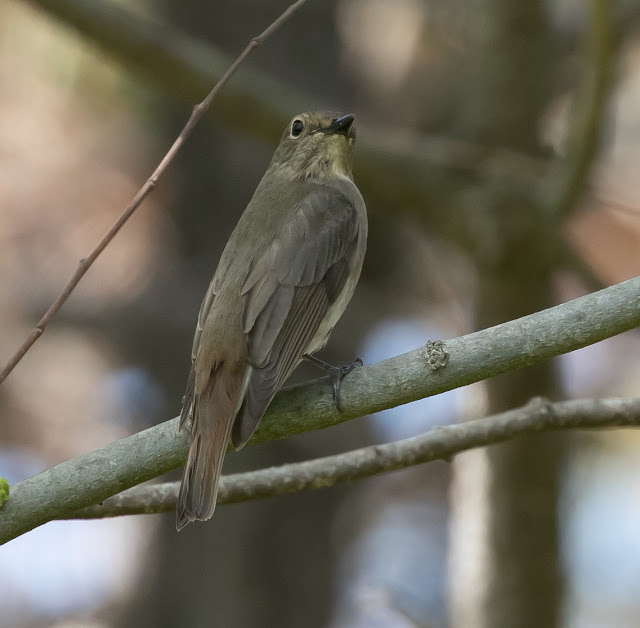 Posted by Neil Davidson at 00:27 No comments:

Email ThisBlogThis!Share to TwitterShare to FacebookShare to Pinterest
Labels: Flycatcher Blue and White

I neglected my usual winter patch in the Matsusaka/Tsu area this year. I say winter but could easily add spring and autumn, there's always something going on. And instead, I head up to Lake Biwa whenever I had free time in search of Lesser Scaup. Successfully in search of Lesser Scaup I might add... unbelievable! This obsession was the result of a female being seen in December. I never found it but what must the odds have been against finding a different bird in the same area? I wonder how many rare ducks are overlooked on Lake Biwa or along coasts where massive aggregations occur. Maybe I should focus on finding a Redhead next winter? Yeah, right.

Anyway, it was good to be getting back to my old stomping ground but each time I went I felt the place hadn't quite lived up to expectation. There weren't the concentrations of winter gulls I'd been looking forward to and the spring build up never really took off. The spring wader passage was slow taking off too, it still hasn't really got going. Plus trying to find habitat in the right condition at the right time has been hard work.

Moan, moan, moan. But looking back at the five visits I've made since 23 March there's actually been a stand out bird each and every time. There was a Thayer's Gull on that first visit and, by two days, my earliest ever Latham's Snipe on 30 March. Into April and the 7th, 13th and 19th produced a totally unexpected Pallas's Reed Bunting, a patch tick singing Japanese Robin and two Little Curlews respectively. It's not to be sniffed at, is it?

So, finally, on to the title birds. I was on the seawall checking the landward side pools for any Garganey which should be arriving now (zero), or any stints along the muddy edges (zero), when my eye was caught by a couple of large waders circling the field behind one of many solar farms that blight the area. They looked as though they'd been put up and were aiming to re-settle, these Far Eastern Curlews in turn led me to notice two much smaller waders, likewise circling and ultimately dropping to the fields. I've seen enough Little Curlews trying the Pacific Golden Plover ploy, Whimbrel ploy even, not to be fooled for a second. Though they'd gone down probably no more than about 600m away as the bird flies, seawall roads don't allow for much choice of direction and the ones currently on offer were of no help at all. So after touring the district I edged along the narrow road between the fields hoping they hadn't moved.

Posted by Neil Davidson at 19:34 No comments: