Of the three snipe species in the title, Latham's and Swinhoe's are clearly the commoner migrants passing through the Kansai region. However, much further south, on a recent trip to Ishigaki, six of the seven identified snipe were Pintail, suggesting they're mainly entering (and exiting) Japan to the south of Honshu. I feel fortunate to have had so many good views of all three species within a short period of time, it's been an important refresher on migrant snipe identification; there can never be too much time spent watching snipe.

I already posted shots of a Latham's seen well a couple of weeks ago, the only one of the trio passing through the region that breeds in Japan. A couple of weeks later I managed some great shots of a Swinhoe's, also in Mie Prefecture, in another of the few fields that offer both good habitat for snipe and viewing conditions.

The Swinhoe's scurried away along a muddy furrow, below the grassy bund, before I'd even pulled up to scan the field, but after 40 metres it crouched, mostly hidden, under the overhanging grass. From the views I'd had of it disappearing along the field edge it was clearly a swintail, and it had a distinct Swinhoe's feel. Knowing it was bound to re-emerge to feed before too long, I settled down to wait. Not only did it soon re-emerge but, to my surprise, made a beline back towards its original position, right where I was waiting. Ultimately it disappeared beneath the grassy field edge three metres to my right. I walked over the spot, I'd have been less than a metre from the bird, along the entire edge of the field and back, but it didn't show itself again.

Next, a couple of juvenile Pintail (pins seen) on Ishigaki.

The next bird is an adult Pintail which, though not seen as well, is of interest, showing the extent of post-breeding moult before migration.

The following bird (in the same field as the above adult Pintail) is a Swinhoe's in my opinion, but I wasn't able to get confirmatory views of the outer tail feathers. This would be the only Swinhoe's I saw on Ishigaki, all others seen well enough to identify were Pintail.

Posted by Neil Davidson at 05:16 No comments:

A few herons on Ishigaki

A trip to Ishigaki last week with the foolish, misguided, never to be repeated (until next time) aim of seeing a Javan Pond Heron, not surprisingly focused more on wet fields than other habitats. Consequently, herons and passage waders featured strongly.

The commonest herons/bitterns of interest to a Kansai resident would be Purple Heron, Cinnamon Bittern and Malayan Night Heron. The latter, more of a nocturnal woodland bird, was easily seen each day after packing up trawling the paddies in search of the already departed Javan Pond Heron. 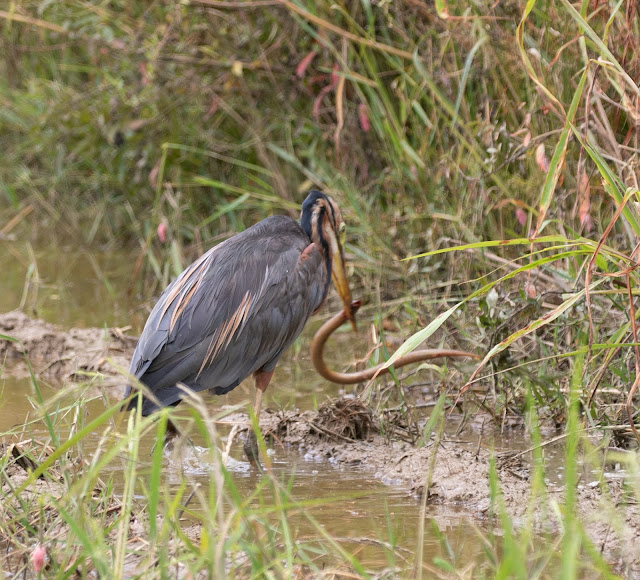 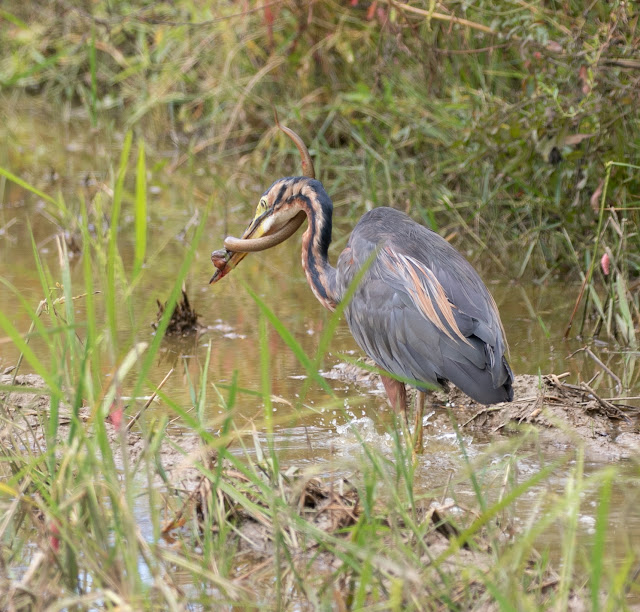 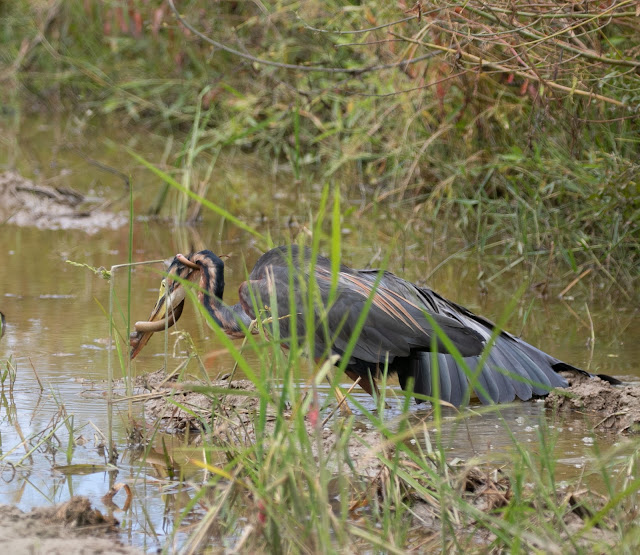 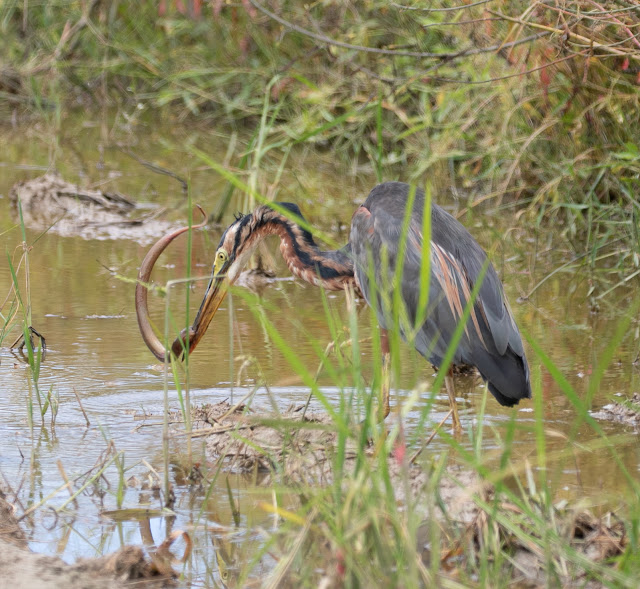 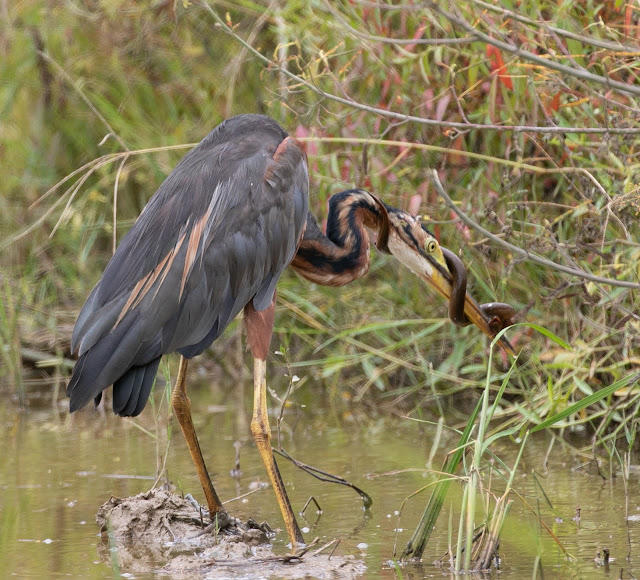 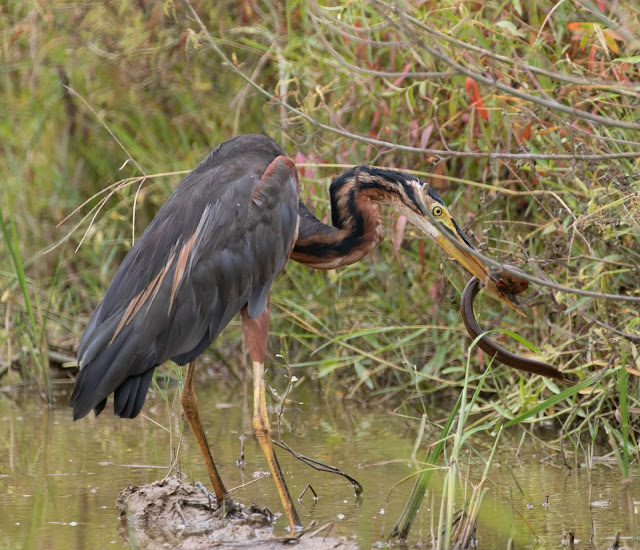 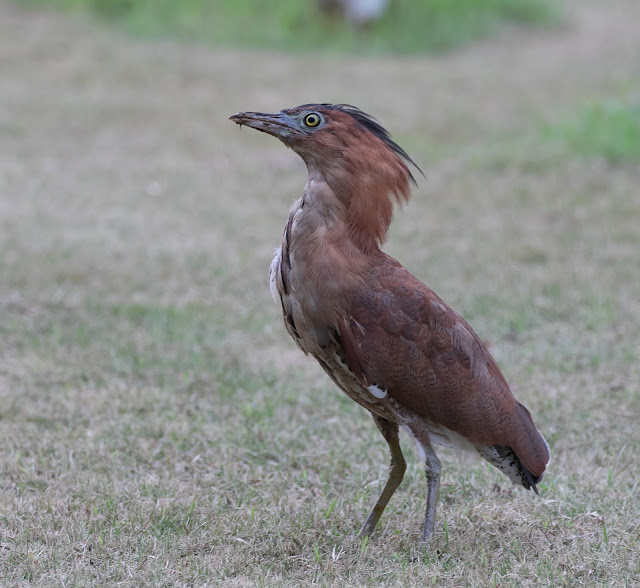 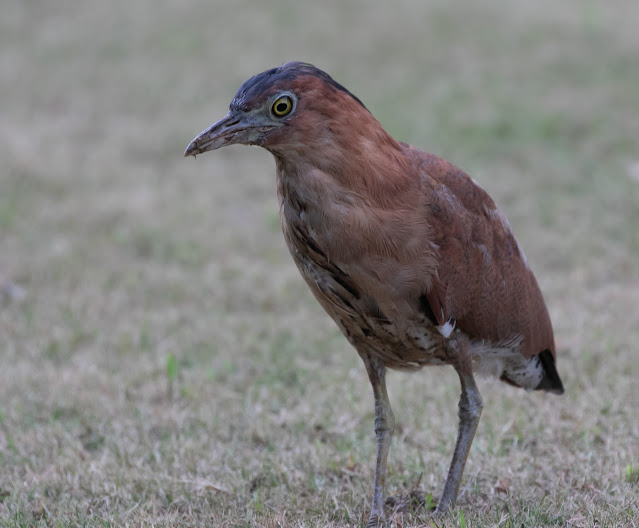 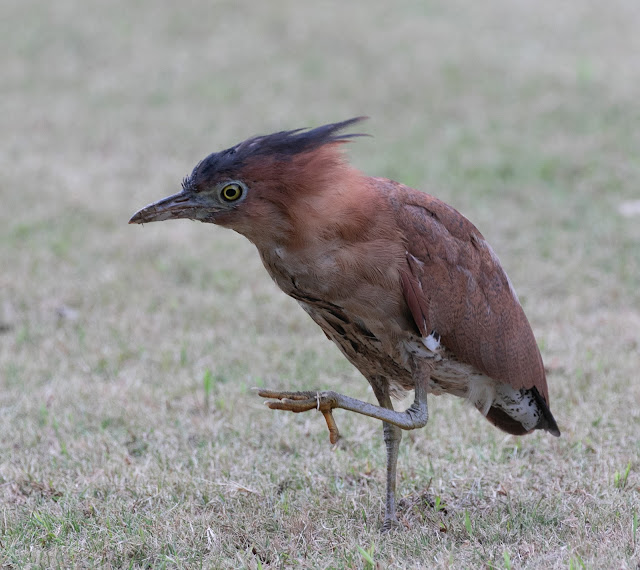 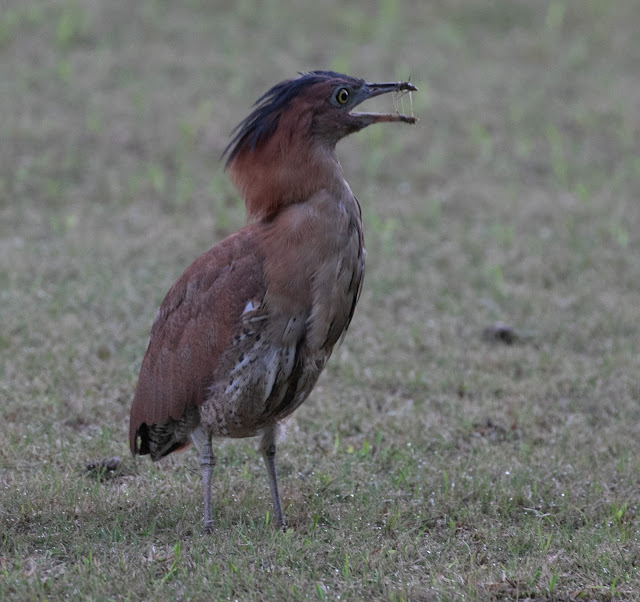 It seems the sun is daring to put in an appearance this morning, after almost three days of more or less continuous and frequently torrential rain. In this shot of a migrant Latham's Snipe the upbound drops of water indicate how heavy the sudden onset was.

Finding suitable fields migrant waders might stop off in is always the challenge, particularly this early during the southbound migration when everywhere seems a sea of full-grown rice. Compared to the Kyoto area, Matsusaka is slightly better off in somuch as the planting/harvest is, rather surprisingly. about three weeks ahead, hence there's more chance of there being attractive fields for the juvenile waders coming through later in the season.
I was really pleased with this encounter because it resulted in two snipe firsts! The first of which involved a confrontation with a Pacific Golden Plover and this brief selection of images outlines how things went.

Having seen off the interloper, I was surprised the Latham's immediately flew 10m further into the open field, rather than enjoy the patch of mud it had seemingly defended. None of my flight shots came to anything due to the poor light, cranking the ISO had little effect as, though the bird came ever closer, the light steadily dimmed and the sky tap turned to near full.


After three hours of relentless rain I decided to head back to Kyoto, thinking the traffic would be a nightmare in these conditions. As it turned out, the rain, at this stage, was restricted to the east side of the Kii Peninsula mountains so the drive wasn't nearly as slow as I'd expected.
Posted by Neil Davidson at 22:26 No comments: